Leave Moixent by the street La Cadena, go down towards the Roman bridge and the fountain with the coat of arms of the Rei. In Jaume, continue until the Plaza de la Hispanidad where the informative panel of the Via Augusta is, and in front of the Museum and the House of Culture. The path turns left at Les Alcusses avenue. Continue along the asphalted road that goes to La Font de la Figuera, counting here the kilometre 0 of this stage.

To 1,2 Km. to the right there is a factory and later a small bridge and another factory. Follow the path on the right, with a signpost. After about 500 metres, leave the asphalted road that leads to the winery; cross the riverbed and take the dirt road that climbs among pines. Take the road we had left below and after about 200 metres the path turns right. Here there is a STOP sign and a small house where a slight ascent begins. After 3.6 km you cross a path, leaving the house on the right and going straight ahead. A little further on there is another path on the right, which is left because it only leads to the river. Shortly after, the house “El Ciprer” appears on the right. 1 km more and you reach an asphalted road, turn right passing in front of the house and continue along the dirt road to the west.

You arrive at a crossroads: on the left the one that goes down to the road and to the hostel of Les Alcusses, there is a big house with chapel included, “Casa Rabosa”. On the right there is a path leading to the Altet de Garrido. Our path goes straight on, in the direction of Monserrat, in the background and on the right you can see a country house. The entrance to the house is at Km. 7. You always go straight ahead, heading west, although the road sometimes meanders, changing its orientation a little. To the left you can see the massif of the Iberian village of Les Alcusses and extensions of vineyards; to the right, almond trees.

After 8.4 km there is a farm with two wells that have a cap-shaped hat. Turn left, descending a little. After 100 m. there is a path on the right that is ignored, with a sign that says Casa Oraá: the path goes straight south. After 9.3 km, turn right and leave the road on the left. After 9,9 km you will find a house with 3 big pines, “Casa Pancheta”. Continue along a path on the left that leads to the Doctor’s house and, before arriving, turn right; descend about 100 m. and continue to the left. If you look to the right, you can see the famous Oraá house on the hill.

After 11 km there is a small bridge covered by vegetation and you go up close to the bank. After 12.6 km you will find Casa Soler. After 13.3 km you will see a wider road, and on the right you will see a sign that you are not allowed to go more than 20 km and another sign that you are not allowed to overtake vehicles. Cross a bridge over the high-speed train tracks and turn left (heading south again) along an asphalted road. The last section is a steep descent, and ends in a gravel path: opposite is La Font de la Figuera; continue along this path. At 500 m. cross the Rambla de Flasino and the Cañada Real Murciana, the path makes a left turn: the great viaduct where the high-speed train goes is on the left, parallel to our steps. After 15.7 km you leave the road that comes from Moixent, after 16.3 km you leave the cemetery on the right and take the Camí del Cementeri to La Font de la Figuera.

La Font de la Figuera is the last town in the province of Valencia to cross our path, before entering the lands of Albacete. It owes its name to a fountain that was at the foot of a gigantic fig tree, in the place that today occupies the public well called Pozanco.

It is necessary to visit the Parish Church of the Nativity of the Virgin of the XVI century, with an altarpiece of Juan de Juanes (painter born in this town). The Hermitage of San Sebastián (16th century) is near the Portal de Valencia and the Centre for Sports, on the old Almansa road. The monument to Juan de Juanes, pseudonym of the painter Vicente Juan Masip is in the Plaza Mayor. In the 14th century, this town already had a hospital for pilgrims, poor passers-by and the sick, and was under the care of the town’s jurors. If you have time left, the Municipal Museum and the Municipal Ethnological Museum await you: La Font has a great wine production. In this region underlies a network of Roman roads, the Via Augusta, and Iberian remains.

The patron saint of La Font de la Figuera is El Cristo de los Afligidos, whose festivity is celebrated on 6 August. In September the festivities to the patron saint, the Virgen del Rosario (Virgin of the Rosary), are celebrated. It is also worth mentioning the Moors and Christians fiestas, in honour of Santa Bárbara. 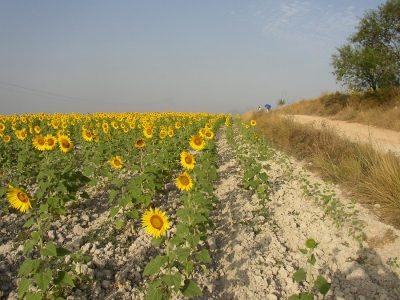 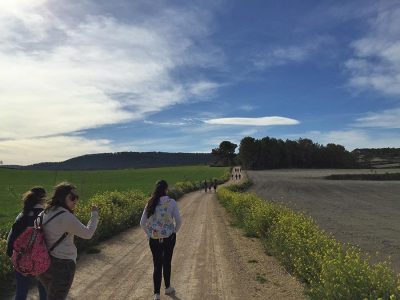 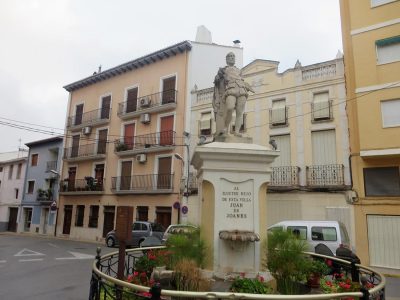