Leave the church on the left and continue along Carrer del Carbó and Carrer Berca until you reach the chapel of Hallazgo, of neo-Gothic design. This chapel is built in the place where the Virgen de la Salud (Virgin of Health) was found, (history: a black Virgin found by a farmer in the hollow of a mulberry tree, back in the 13th century). Pass the Plaza del Organista Cabanilles, turn left and cross Salvador Castell street. At the roundabout, cross the Puente de los Maristas (Bridge of the Marists), which leaves you on the other side of the river Magro. The Camí de la Minyaneta and Camí de Be take you through orange groves. When you reach a new industrial estate, follow the street on the right that takes you to road 3320, which crosses at the roundabout to find in front of a scrapyard that is bordered by a car access on the right. Turn left and follow the path, from which you can see on the left a 14th-century transept with a temple: tradition has it that King James I fell ill here. Walk on Roman road: the Department of Environnement has reproduced a section for the curiosity of the walker. Turn right and pass under the ring road, walk parallel to it and reach a large orange warehouse, known today as Cotonera Events, cross the road and by pedestrian walk you reach the Iron Bridge over the river Júcar, turn right and then left to enter this historic town of Alzira by the main street of Santa Maria and street Santa Lucia, following the walls. In the Middle Ages, this city was one of the most significant fortresses and still today you can see numerous fortified towers.

The construction of the walls dates from the ninth and tenth centuries, and their purpose is twofold: military defence and defence against flooding.

The route through the town of Alzira is marked with scallop ceramics.

Alzira is an island, the Arabic voice ”al-yazirat” defines it like this: island or isolated land. The Via Augusta crossed the city through two stone bridges: the Santa María bridge, with four pointed arches, which began to be built in 1308, also known as the Gothic bridge of the roadway (now disappeared), through which those coming from Valencia entered; the San Bernardo bridge, at the western end, with only two eyes and later construction, which was demolished at the beginning of the 20th century, and the Iron Bridge.

Crossing the city of Alzira you can see some buildings and monuments of interest, such as what remains of the Hospital de Santa Lucía, opposite which is the house where King James I supposedly died, the Municipal Museum of Alzira (MUMA), where you can admire a Gothic table representing six apostles, among which stands out a magnificent Santiago Peregrino, the Town Hall, whose building was built between 1547 and 1603 and belonged to the Marquises of Santiago and the Archpriestly Church of Santa Catalina Mártir which was built in the thirteenth century on the Great Mosque. In the 13th century, three hospitals for pilgrims and passers-by operated in Alzira, which were later merged to form the Hospital de Santa Lucía.

You leave Alzira crossing the Plaza Constitución, calle Mayor, calle Santa Catalina, Calderón de la Barca, Santos Patronos, Colón and Plaza San Judas Tadeo to look for the Pont de Xàtiva, which you cross underneath. Turn right onto Ben Jafacha Street. Pass in front of Molino Fus and follow the path between orange and palm trees until you reach Carcaixent. 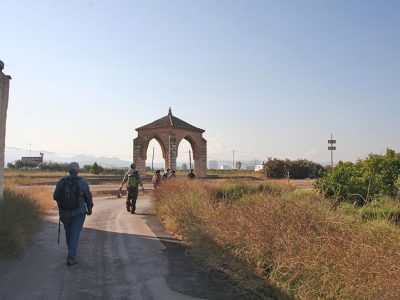 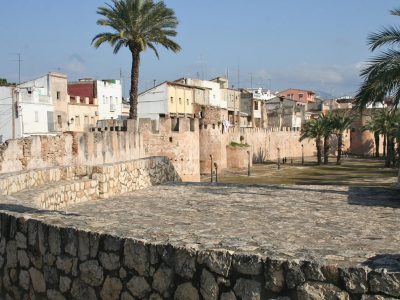 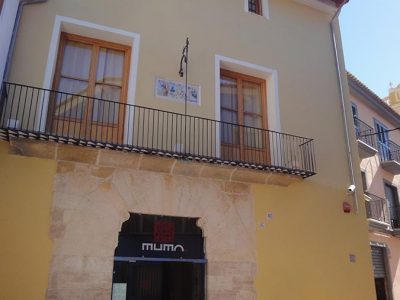 The route is marked here with scallop ceramics.

The development experienced by this population is making the infrastructures change continuously and are responsible for the remodeling of the roads. One enters through San Isidro Street, continuing through San Cristóbal, Sorolla, Plaza Mayor and Plaza Constitución, where the Town Hall is located.

Carcaixent is a road-city and being located in the old Via Augusta it had a hospital for passers-by. It is also the cradle of the orange. At the end of the 18th century, the parish priest Monzó planted an orange tree for the first time, which made the Valencian Community a pioneer in foreign trade. You can visit the great Magatzem de la Ribera, also known as “the cathedral of the orange”. Likewise, you should visit the temple of the Assumption, built in the sixteenth century. In one of the chapels you can see an image of the Apostle Santiago on horseback. It is worth going into Calle Santiago Apóstol, if you like, to see two houses in a typical Valencian modernist style. Next to the Town Hall is the house of the Marquise de Montortal, where you can admire a Valencian kitchen decorated with tiles of incalculable value. A silk centre of recognised prestige between the 16th and 18th centuries, you can take advantage of this town to learn about the history of the silk industry and the cultivation of worms.

You leave Carcaixent through L’Obra street, next to the church, Miguel Hernández square, San Llorenç street and turn right onto General Prim: you are near the old travellers’ hospital converted into the Mestre Vert Music Conservatory. You pass under the railway track. Once on the other side, on the left and followed by palm trees, you arrive at Cogullada. 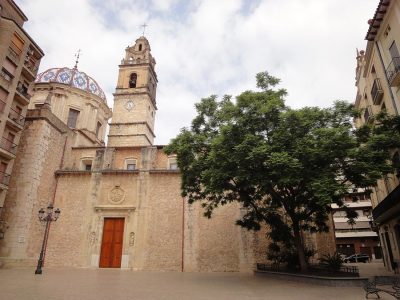 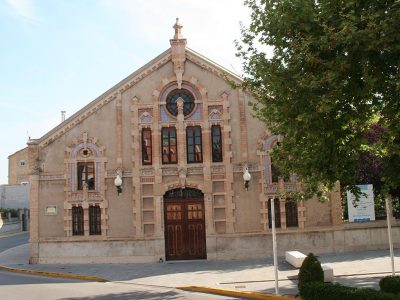 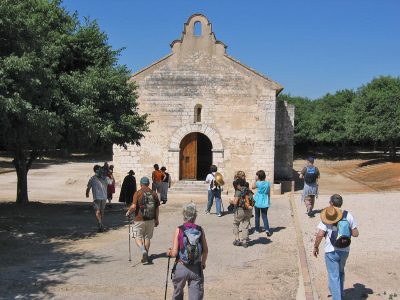 The route is marked with scallop ceramics.

Cogullada was an important farmhouse during the Arab domination. Its church has a canvas donated by Pope Paul III and brought here by a pilgrim. There are bars or cafés…You leave through Rabalet street; at the corner, a tile shows you the way. One kilometre away, in the uninhabited village of Ternils, on the road, there is a beautiful chapel from the end of the Romanesque, proto-Gothic, declared a National Monument and dedicated to St. Roque.

Once you have seen the Hermitage, go back about 10 metres and enter by an asphalted road, duly signposted. The path goes between orange trees and other fruit trees. After about 300 metres follow the path on the right; further on take the asphalted path on the left. After about 5 km, the road turns right onto the service road, due to the construction of a new road, which we saved by underpass; we leave the industrial estate of the town of Pobla Llarga, to which we enter passing the Shell petrol station on Calle Primer de Maig and turning right onto Calle Vall.

It is marked with yellow arrows. It is a village-path like almost all those that are crossed, since they belong to the type of itineraries distributed along a central axis, which is not only the main street, but also the route of the pilgrims to Santiago.

It passes in front of the Church of San Pedro Apóstol, built on the primitive factory of the XIV century. The memory is preserved of having had a hospital for passers-by under the title of San Martín, ordered to be built in 1317 by Pere d’Esplugues, the archdeacon of Valencia cathedral.

You leave Pobla Llarga following the main street and the Dr. Lorenzo Santamaría avenue, turn left into Pintor Estruch and then right towards the train track, which you pass underneath. Continue to the right along an asphalted road and orange trees on both sides. To the left, you can see what remains of an old Arab bridge, the Pont de l’Ase, which crosses the Barranc de Barxeta; in front, the sun and the mountains. Always straight ahead on an asphalted road, you can see Manuel. At the entrance, on the left, is the laundry room. 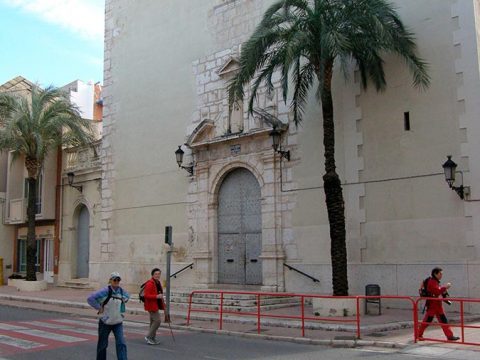 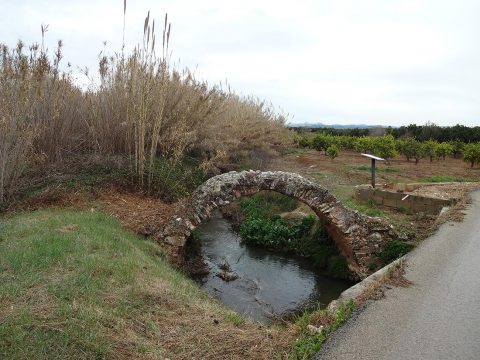 The route is marked with scallop ceramics. When you reach the first houses, turn right into L’Abad street. Cross the Greenway that crosses the village and you reach the Plaza del Sol. The parish church is dedicated to Santa Ana and San Joaquín and dates from 1535.

Leave Manuel through Juan Moreno Street, cross the Greenway again to take up the road again, turn right and go past the old station and at the crossroads follow the road, between the CV-575 road and the Greenway, Codina road, half asphalted, then ground, bordering an irrigation channel and later the river Barxeta for 1.5 km. This part of the road was cleaned and repaired. Then the path widens and turns right into the Manuel to Torre Lloris regional road, a hamlet of Xàtiva some 330 metres away, with a bar.!!

After about 100 m. turn left and follow the path, which between orange trees, leaves you on the old road from Torre Lloris to Lloc Nou. Follow it and the Camí Senda de Murcia. At 1 km you will find the CV-600 road, cross it and continue along the path; after about 100 metres turn right and continue until you reach this road, (waiting for the bridge of Les Palanques over the Albaida river to be repaired), which you will follow until you reach the industrial estate. Turn right to avoid traffic. Take a parallel path to the underpass and the pedestrian walkway to the Xàtiva bullring. 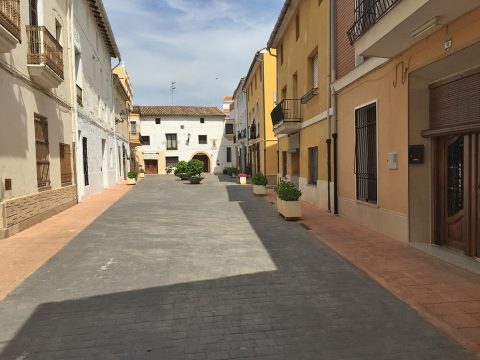 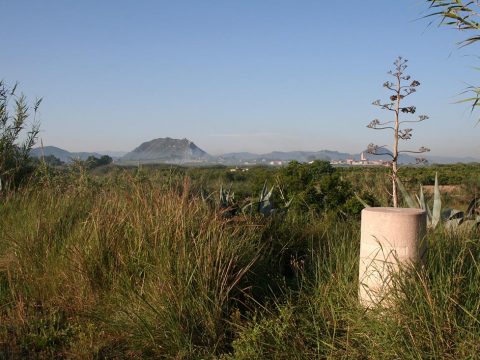 The city tour is marked with scallop ceramics.

Xàtiva awaits us with the walls in the foreground, on the other side of Plaza España. Cross to the left to look for the fountain of the 25th pipes and the street of San Pedro, street of the Angel and Moncada street. Turn left at Peris Street to access La Seu and the old Pilgrims’ Hospital.

Iberians, Romans, Goths and Arabs magnified Xàtiva. This city participated in the Councils held in the city of Toledo until the sixth century. It had a hospital run by the friars of the Penance of Jesus Christ. The current building dates from the 15th century and on its façade you can see a pilgrim under the protection of the Virgin.

This city is a small jewel and it is worth stopping a little and going around its places:

If you don’t want to walk any more, you should know that from Jaume I avenue there is a tourist train that takes you to visit all these wonders, and it’s always better that than not seeing anything.

The Moors lived in this city on the outskirts of San Juan, beyond the Plaça de Sant Jaume and were expelled in 1609 with serious economic consequences. It should also be noted that Xàtiva was known in the West and East for the paper it manufactured, of unrivalled quality. In 1150 the first European paper factory appeared in Xàtiva, paper made from rice straw that replaced papyrus and parchment.

Some Setabenses occupied the Chair of St. Peter and many were those who achieved the dignity of cardinal and episcopal. Their knights are very many among the teachers and commanders of the Military Orders of Saint John, Saint James, Montesa and Calatrava. 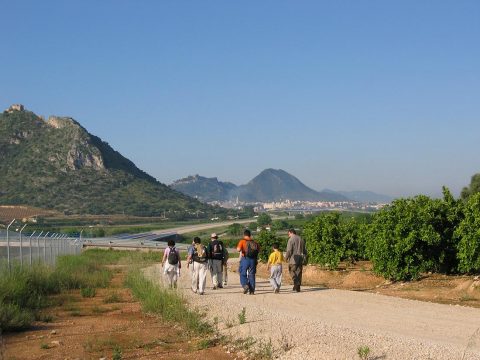 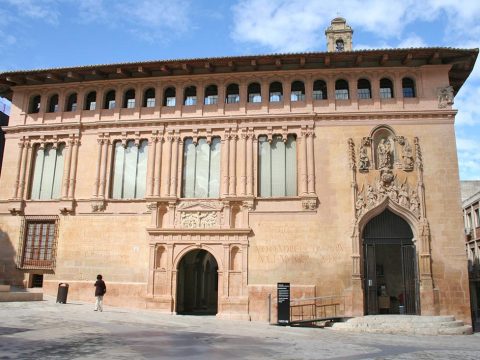 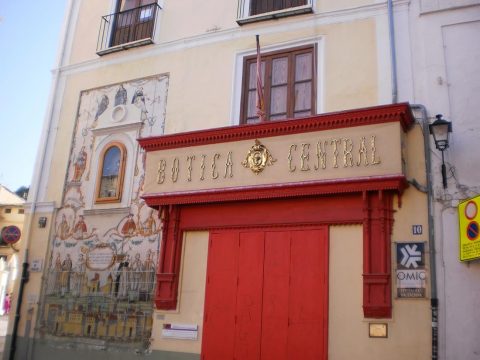 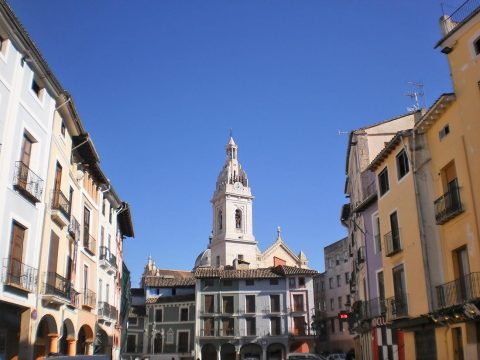