You leave Torrijos from the Collegiate Church, along Doctor Cifuentes, Buena Dicha, San Gil and Ancha streets, and follow the N-403 road to the roundabout. At Scrapping Point La Paloma cross the road and enter the service road, in front of Gregorio Scraps. Without leaving this road you will reach Val de Santo Domingo. You enter by Doctor Fernández Ferrer and José Antonio streets.

In 1216 the payment of Val de Santo Domingo is mentioned in a Mozarabic document. Its location between two transhumance routes, La Segoviana and the Camino Real de Madrid, must have been decisive in the origin of this town. Caudilla, was land repopulated by old Castilians in the twelfth century. Enrique IV settled in the town on his way to Toledo in the 15th century.

It is about an hour’s walk away. The parish church dedicated to Santo Domingo de Silos,from the 16th century. The hermitage of Santa Ana dates from the 13th century.

From the church you look for the Camino del Arroyo. A little further on you cross the dual carriageway by overpass. Opposite you can see the is Renaissance plateau and the Alamín mount trimmed in the background; cross the Vía Pecuaria that goes from East to West and continue until you reach a crossroads of four paths, where you choose the one on the left passing in front of a farm. A few metres further on you will find a crossroads: the one that goes straight on exits the road; and this is the one you follow, asphalt for a kilometre and a half along the Toledo road, N-403; at the roundabout you cross the Extremadura road, continue on the left, you pass under the A-5; at the next roundabout, the second exit on the right, calle carretera de Ávila. 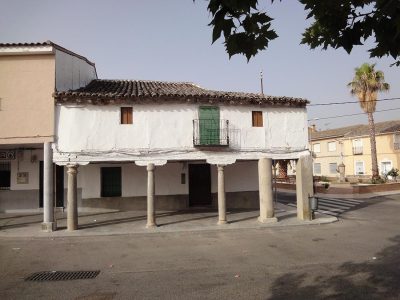 It is entered by the road of Ávila, Huertas street and Plaza de la Constitución.

This small town is full of monuments and we are pleasantly surprised by the journey through its streets. It is of Roman origin, and later it was an important Muslim square. The voice Maqueda is of Arabic origin and can mean “firm” or ” a stronghold place”. It was the capital of the Dukedom of its name. The castle was built in the last third of the 15th century and belonged to Don Gutierre de Cárdenas. The Torreón de la Vela is the rest of the old Arab fortress. It has a 15th century jurisdictional Rollo.

The Church of Santa María de los Alcázares is opposite the Castle. The towers were part of the defensive system of the population. The baptismal chapel has a Mudejar vault and a Roman capital from the 1st century has been used as a holy water stoup. The patron saint of the town is Nuestra Señora del Otero or the best known of Nuestra Señora de los Dados, this name is given because in the hermitage were found dice of different colors. It had two hospitals: the one of San Ildefonso and another one called Santa Cruz for the pilgrims.

The Lazarillo de Tormes, Lázaro, suffered here a beating by the priest of Maqueda and had to beg for alms for the neighboring towns to survive.

As a curiosity we must say that the shield of the population is surrounded by scallops.

It is necessary to take water before leaving, since it is difficult to obtain before arriving at Escalona. You leave following the old road. After about 100 metres, take the path on the right, which is not abandoned. After about 5 kilometres you pass through a stream, which can carry a lot of water and forces you to take off your shoes, before the Charpona House, which is almost always closed. From here there are 7 kilometres left. You enter Escalona through the Los Cuervos Urbanization. Ahead, the Castle surveilling the river Alberche. It crosses the bridge: the sandy river invites you to go down to rest, wet your feet, relax… A brief ascent takes you to the gates of the castle and the village. 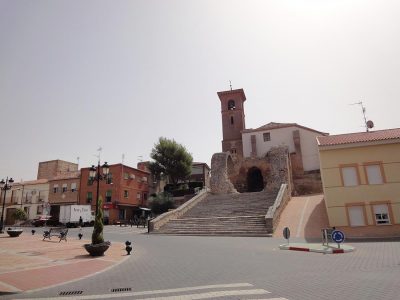 This illustrious town of Escalona on the banks of the Alberche river, began to sound in the history of Castile back in 1083, following the reconquest by Alfonso VI. The 13th century saw the birth of Prince Juan Manuel, the grandson of Fernando El Santo, and reached its maximum splendour in the mid-15th century, when it became part of the estate of the all-powerful Constable Don Álvaro de Luna, who ordered the construction of the impressive castle-fortress we have seen.

Part of the walls enclosing the town are also preserved, including the door of San Miguel, above which stands the tower of the Collegiate Church. The parish church of San Miguel Arcángel conserves a stone carving of the Virgin and Child, from the 15th century. The Franciscan monastery was built in 1521. It had two hospitals: one called Santiago for pilgrims’ hostel, and the hospital of San Andrés, founded in 1527 by the Marquises of Villena.

The main square with arcades is worth seeing and is already mentioned in the Lazarillo de Tormes,(historical novel) as it was there that Lazarus, fed up with the blind man, left him half dead after giving him a strong bash. 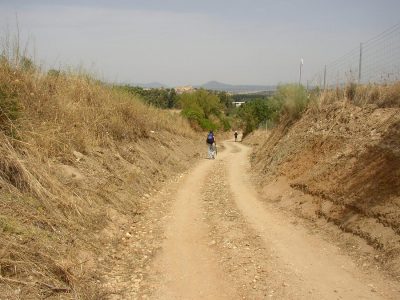 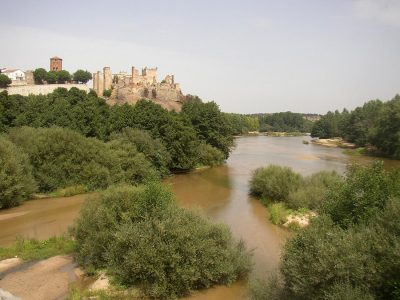