You leave Mora through the Castilla-La Mancha square and Toledo street. Arriving at the last houses of the village, the pilgrim can see to his left a row of attached houses, the way also leaves to the left. At the fork you choose the path on the right and the same thing at the next fork. The road is wide and good. Leave a pottery factory on the right and continue towards the overpass over the railway that leaves you on the other side of the road.

The route is marked with scallop ceramics. You enter by the church street. This small municipality, called “small village of the king” in the newspaper Cosme de Médicis that passed through here in the second half of the seventeenth century, only keeps the Arab castle that later became the palace-house of Don Juan de Padilla.

The parish church is dedicated to Santa María Magdalena and inside you can see a picture of Santiago Apóstol.

You leave Mascaraque passing through the hermitage of Veracruz in the extreme north of the town, follow the left of the road to the cemetery and continue along it until you reach the base of the hill crowned by the castle of Almonacid. 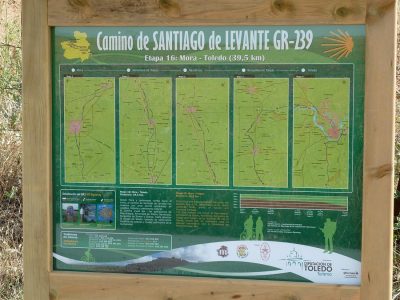 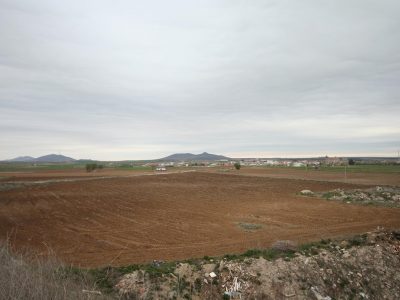 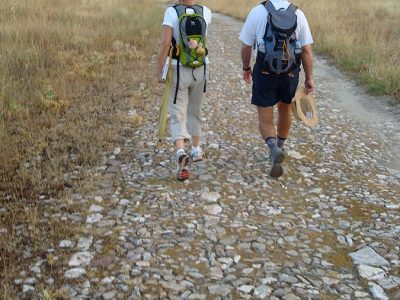 The route is marked with scallop ceramics. You enter through San Cebrián, Cruces and Iglesia streets. The parish church is dedicated to San Antonio Abad and paintings by Alonso del Arco are preserved. It had a hospital founded by Silvestre García Escalona, who was Bishop of Salamanca.

On several occasions Almonacid de Toledo would pass from one hand to another. In 1086 King Alfonso VI gave this village to the church of Toledo. A century later, in 1132, Alfonso VII donated it to Count Pons de Cabrera. In 1176, Alfonso VIII gave it to the Order of Calatrava.

You leave Almonacid through Parque Street, Hospital Street and Toledo Street, immediately taking a path, called Camino de Almonacid, which comes out on the right of the road that is a little upper level. The Guazalete or Guadalete stream is just 2 kilometres away. A few metres to the left, barely visible between the reeds, there is a single arch bridge, of solid construction with stone roadway and brick arch.

Approximately 1 km away is the Romaila farm: you have to cross the road bordered with cypresses to access the farm and follow the way. 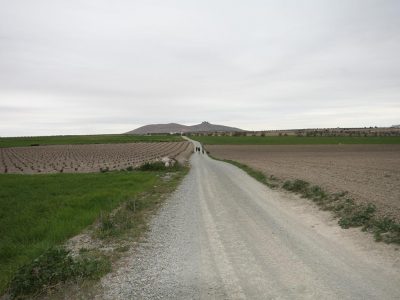 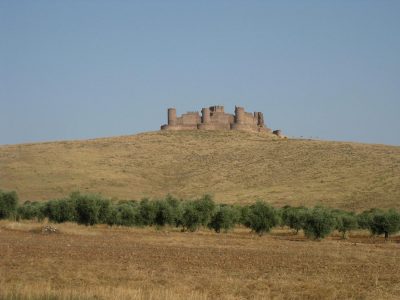 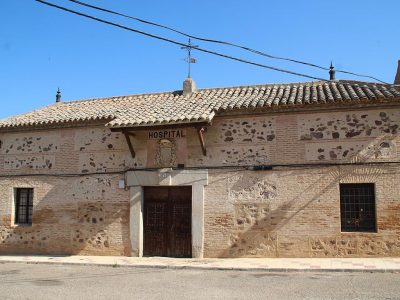 The route is marked with scallop ceramics. You enter through the path of Mora and Real street. It belonged to the Order of Calatrava, has a parish church dedicated to Purification and a hermitage dedicated to Santo Cristo de las Aguas.

Leave Nambroca through Doctor Benito Street, between Mesón La Posada and the garden. After about 30 metres, take the road towards Burguillos de Toledo, signposted with an indicator. All the way is also signposted as Ruta del Quijote. You pass two roundabouts almost in a row, and you always go straight ahead. Further on the road passes under the N-400 road and continues to Burguillos de Toledo. 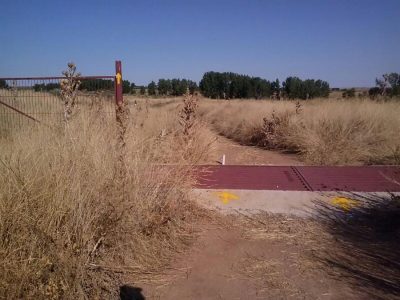 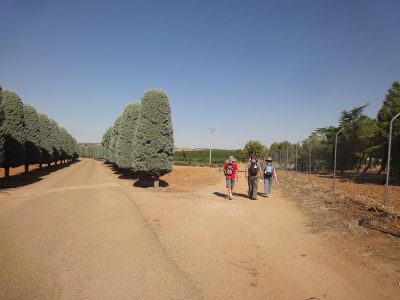 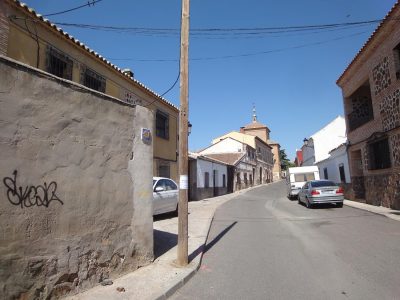 The route is marked with scallop ceramics. Follow Nambroca street, Ciudad Real and San Pedro and you will reach the Town Hall and the Church.

Burguillos comes from the term “burgus”, burgo, small town, small neighbourhood. The parish church is dedicated to Santa María Magdalena. In the same square there is a Renaissance scroll with a Corinthian capitell, on which there is a forge lamp and a forge cross.

It leaves Burguillos by the street Ajofrín. When you get to the park, turn right, following Layos street that brings us closer to a large duck raft, continue straight ahead and pass the residential area and the street Picos de Europa. Pay attention to the arrows and the posts of Ruta del Quijote, as sometimes cars park at the brands. When the residential area ends, the road narrows and turns to the right, there are little trees on both sides, which will provide good shadow when they grow. 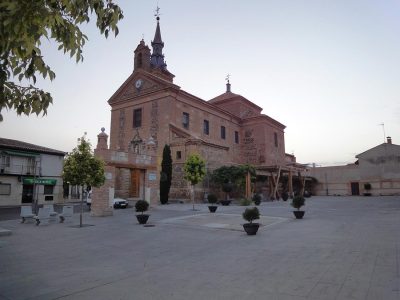 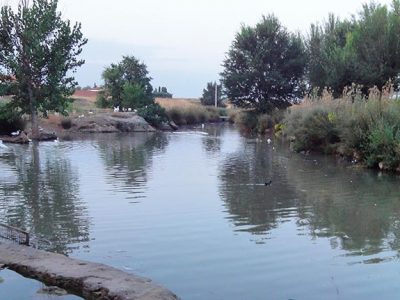 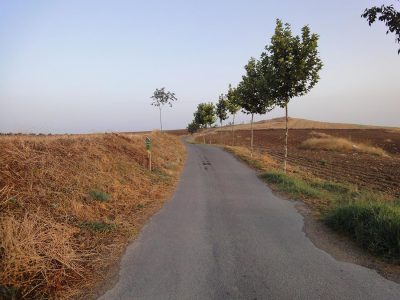 The route is marked with scallop ceramics. The Eras path leads to the road and the town of Cobisa.

It seems that the name of this town comes from the Arabic and means refuge or cave. The church is dedicated to San Felipe and Santiago Apóstol. Opposite is the Town Hall. If you still have time there is an interesting Ethnological Museum located in the building of the Cultural Center.

Take the street to the left of the town hall to look for the Arges Way, which you follow for 1 kilometre. Then, our way turns to the right following a sign that puts Vivero-Jardín de Sorbus, also there is the signpost of Route of Don Quixote. Another kilometre and turn left and follow this path which receives different names: Camino de Venero, La Pozuela…; without leaving it, it leaves us on an asphalted road without hard shoulders, the TO-7901-V, which takes you between farms called ” cigarrales ” to Toledo: Cigarral de Amira, de Santa Lucía, de Santa Ursula… You pass in front of Hotel Abacería and Hotel Los Cigarrales. After about 20 metres the road forks, the one that goes straight out to the Bridge of San Martín, the one on the right goes towards the Hermitage of the Virgin of the Valley and Bridge of Alcántara. From Cobisa to this point 6.8 km. 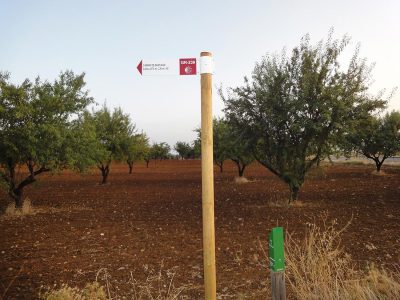 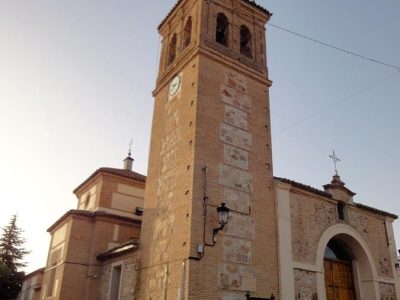 Cross the road and continue along the pavement until you reach Toledo, which appears in all of its splendour to show before your eyes. There are 2.5 km to the Alcántara Bridge. You cross and climb the stairs until you reach the Santa Cruz Hospital, now the Museum, and Zocodover Square.

Toledo (from the Latin Toletum; in Arabic Tulaytulah; in Hebrew Toldoth; in Mozarabic Tolétho), is the capital of the Community of Castilla La Mancha.

It is entered by the main road, at the height of the Castle of San Servando turn left crossing the river Tajo then the Alcantara bridge. At the end of the hill was the Santiago hospital, of the Military Order of this name that was founded in 1175, although it also had another under the invocation of San Miguel, both having as mission the lodging of pilgrims. Next to the hermitage of the Virgen de la Estrella, very close to the church of Santiago del Arrabal formerly called Santiago de la Espada, there was another hospital for pilgrims. This church is one of the oldest in the city: it was built in 1125 on top of a mosque, next to the Bisagra gate.

Toledo is a city with a great past: it has Roman, Visigoth, Muslim, Jewish, Mozarabic and Christian monuments. There the three great religions coexisted, Muslim, Jewish and Christian, leaving an example of coexistence and tolerance that translated into the cultural and intellectual enrichment of the city.

It would be long to tell everything about the Mosque of Cristo de la Luz, about the synagogue of Santa María la Blanca and the one of Transito, about the Cathedral, the Mosque of El Salvador, etc, and the Alcazar, which is also History. Toledo must be an obligatory stop for the pilgrim.

It is worth stopping for a while and visiting the Casa del Greco, the Santo Tomé parish church where you will find El entierro del Conde Orgaz, the Palacio de Fuensalida and go up to El Parador Nacional to have the same panoramic view as El Greco when he painted this city. 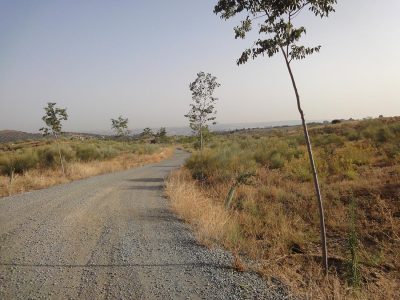 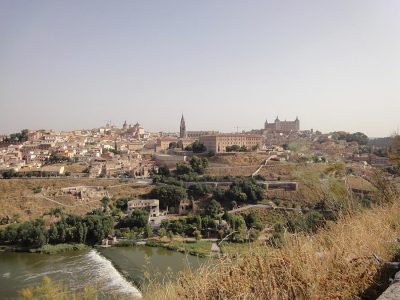 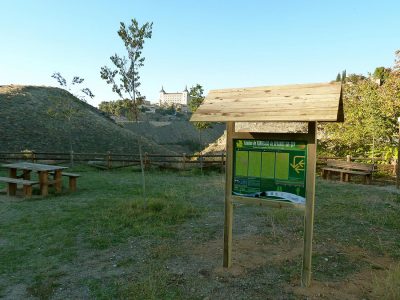 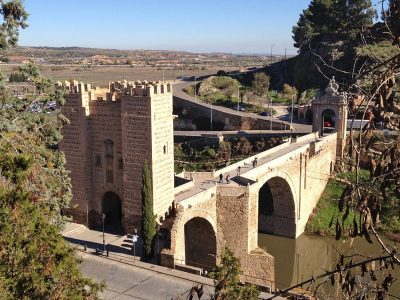 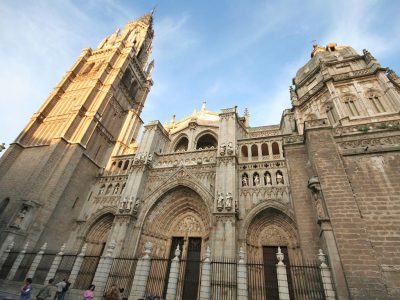 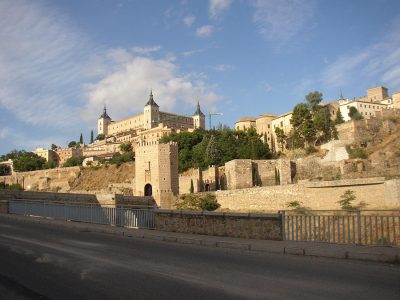