From Don Fadrique, take the Plaza Mayor, Toledo Street, Villacañas Street; pass by the Hermitage of San Gregorio, cross the river Riánsares and the Cañada de los Sorianos; from here there are 6 kilometres to the village of Villacañas.

The route is marked with scallop ceramics. You enter the village by crossing the train track over an overpass, you leave at the Glorieta del Prado and Calle Mayor. The parish church is dedicated to the Assumption and belonged to the Order of Saint John. The Ethnographic Museum of Silo and the Museum of La Tía Sandalia are two good places to see and to get an idea of the typical houses of this area, the silos.

It is important to celebrate one of the most deeply rooted rituals in the town, the feast in honour of Santo Cristo de la Viga, every first of May.

The route is marked with scallop ceramics. You enter by crossing the motorway through an elevated pass at the height of the Ermita de la Virgen de Loreto practically in ruins, cross the Andalucía avenue, formerly N-IV; take Cruces street on the right and, behind the church, you reach the town centre.

Tembleque belonged to the Order of St. John of Jerusalem, but appears for the first time in history back in the year 1163, when King Alfonso VI snatched the village from the Arabs along with the castle of Consuegra. It is in 1241 when Don Ruy Perez, prior of the Order of St. John, grants him a letter of population. The Town Hall is the palace of the Knight Fernández Alejo, of the habit of the Order of Santiago. The town has become famous for its Plaza Mayor, one of the most beautiful and original in Spain, built in the time of Felipe IV.

The parish church, dedicated to the Assumption, which belonged to the priory of San Juan, is very notable. One must not miss the Ermita de la Concepción, where one can admire a beautiful cross and roll, as well as the Palacio de los Ylustres Fernández Alexo, also known as Casa de las cien puertas (House of One Hundred Doors).

The tour around the village will reveal beautiful Manchego patios and grilles.

A few kilometres south-west of the village stands the beautiful sanctuary of Cristo de la Palma, commonly known as Cristo del Valle. It has a Greek cross plan, made of masonry and bricks, and has an ostentatious doorway made of berroqueña stone. The coat of arms, carved in limestone, bears a date, 1698. There is a tradition about the origin of this sanctuary: the Christ who is venerated in this chapel under the title of La Palma and Santiago, was painted on 25 June 1688 by two pilgrims who said their names were Juan Bautista and Manuel Terrín, who, on arriving at this site, stayed in the quintería that Juan Montoro had and in gratitude told him if he liked to have a Holy Christ painted for him, answering yes, they engraved on the rough canvas of the wall the image of Christ using a rough brush of coal and five different colors that they brought and kneaded with saliva, which was absent without any notice. Since then this Christ of La Palma and Santiago has worked great portents. The festival takes place on the second Sunday in May. 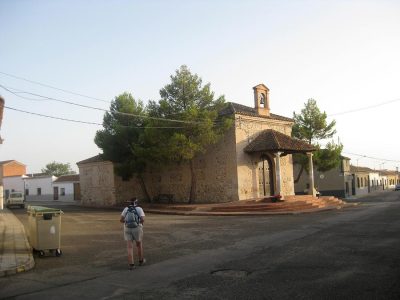 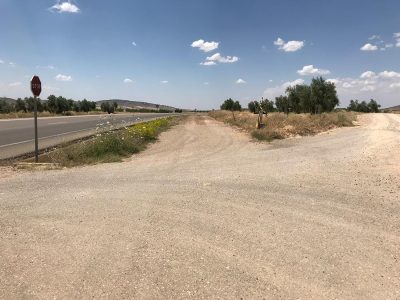 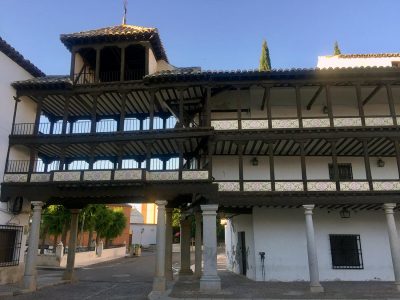 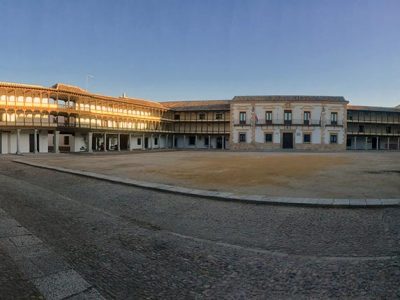 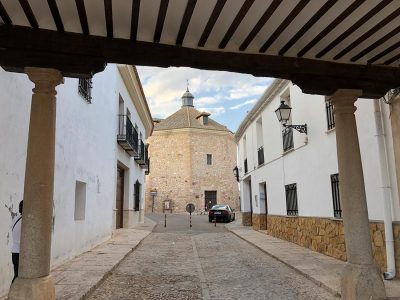 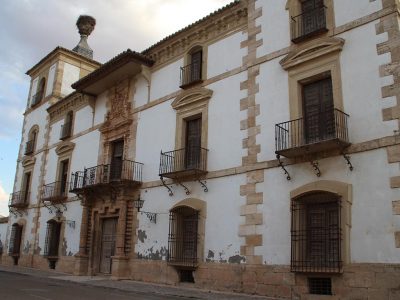