Take Corretgería street, continue down the street and Plaza de Rosa. At the church of Santa Tecla, turn left on Calle de las Ánimas, go past Calle Blanc and follow the Camí de la Bola for about 2 km, until you reach the town of Novetlé.

The route is marked with scallop ceramics. You can see the church of the Virgin of the Rosary from the 16th century, in Tuscan style. The Town Hall occupies the old Alquería de Tallada, dating from 1748.

Continue along the road and after about 100 m turn right until you find the CV-6540, road to Ollería, turn left and at the next roundabout turn right for a pedestrian crossing, then at the detour goes to the left. A little further on you go up the bridge that crosses the high-speed railway: Annahuir can be seen in front of you and between palm trees. 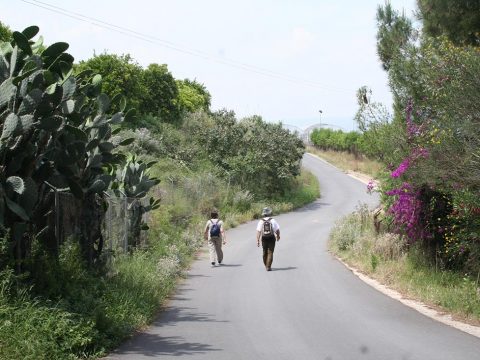 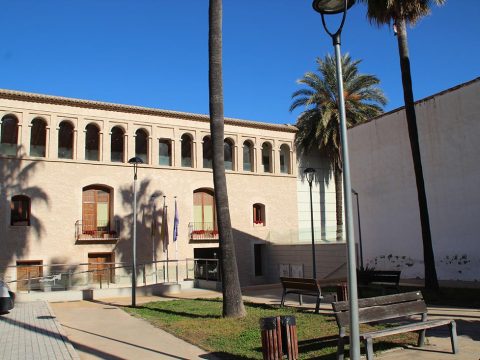 The route is marked with scallop ceramics. It is a village of Arab origin. It is a hamlet of Xàtiva. The church is dedicated to the Virgin of Los Angeles. There are beautiful sundials.

From here you descend a small hill and, following the path, you reach a ford over the river Canyoles. Turn left and you will reach Ayacor.

The route is marked with scallop ceramics. It is a hamlet of Canals. It awaits you with a medieval climb and a laundry room. The main street leads to the church of Santiago Apóstol, which opens its façade to a large square; it is an 18th century Baroque building.

From Ayacor you leave towards Canals, leaving the church on the left, along the Camí de Canals.

The route is marked with scallop ceramics. Canals is named after the canals that cross the town. Then you enter through the Avenida de la Ermita and turn right along the cypress walk that brings you closer to the Ermita del Cristo de la Salud (Chapel of the Christ of Health). A few metres further on, turn left onto Jaume I avenue, where there is a milestone indicating the way to Santiago. Continue along it and pass in front of the Market, where the pilgrims’ hostel (first floor) is located. You reach the Pont del Riu square, turn left onto Sant Roc street and you reach Plaça de la Vila, where the Town Hall is located.

Follow Remei Street, Church Street and Plaza Mayor. The church is dedicated to San Antonio Abad, built in the 13th century and reconstructed in the 17th century, with the Tau de los Antonianos in its grille.

On the night of 16 January, the feast of Saint Anthony is celebrated by burning an immense bonfire made of wood brought from the forest and begun to be collected on 8 December. This accumulated wood surpasses the height of the church tower, stacked in such a way that when it burns it collapses towards the inside of the pyre: it is the highest bonfire of all those planted in the Valencian Community to celebrate the winter equinox.

At the edge of the road stands the Tower, the rest of the palace of the Borja, where Calixto III was born. What used to be the oratory of the house has now been transformed into a chapel to serve the neighbourhood.

Canals also had a hospital for passers-by and pilgrims, in what is now house number 5 on Hospital Street, which functioned until 1860. In the Plaza de la Trinidad there is still a house that belonged to the Knights Templar of Montesa.

The exit from Canals is along Carrer Mayor, Carrer del Salvador and Carrer de la Torreta, where there is a cross with a green cross (representative of the Inquisition) on the same corner of Carrer Calixto III, which leads to the Plaça de L’Institut and Camí de les Moles. After passing the Cemetery, the path goes down towards the old mill, turn left crossing the river Canyoles by an asphalted ford. After a few metres, turn left and exit onto the Mangay path. So far 2.8 km. At the end of the road you will see the ruins of the castle and the possession of the Order of Montesa, depository of the goods of the Templars and Hospitallers. It is located in the town of Montesa, about 2 km to our right.

It is necessary to follow the Camí Mangay until finding again the river, that is crossed by asphalted road, turns to the left and continues until Vallada. In this section you will not fail to see on your left a finger-shaped peak, “el Penyó”, 689 meters high.

The path that is now called Camí Marni will take you to Vallada without setbacks, except for the detour that the overpasses make you take. When you reach a point where you see the village and the path ends in a wide space, take the path on the left, pass over the river Canyoles along an asphalted section, when you reach the height of a house on your right, the path turns to the right and along a path brings us closer to the Jardi de la Vila, where the monument to the Way of Saint James is located. 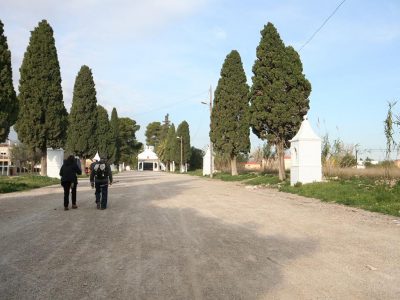 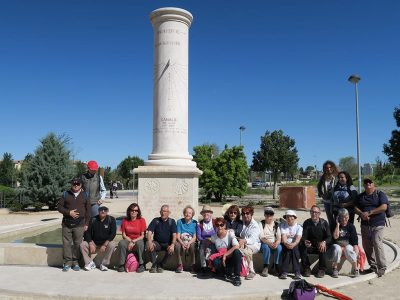 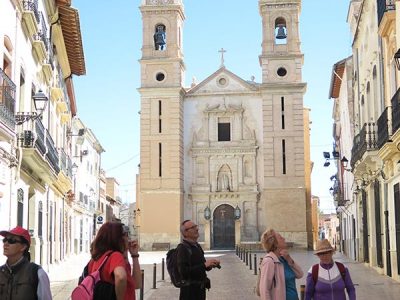 The route is marked with scallop ceramics. Follow Els Molinets Avenue, Virgen de Gracia Street and Plaza Mayor. Turn left onto calle San Vicente, formerly called calle del Hospital or calle Empedrat, where the Hospital de la Orden de Montesa used to be, and continue to the Ermita del Divino Juez, where the hospital was later located. It goes down through Santa Cruz to the Plaza de la Iglesia. The parish church is dedicated to Saint Bartholomew (17th century): an image of Santiago contemplates you from a column in the nave. Further on, on Santísimo Cristo Street is the Prehistory Museum, located in an old mansion built in 1789, which brings you back to the past. Follow Santa Rosa Street and Mig Street.

The festivities are dedicated to Santo Cristo and San Bartolomé with interesting dances typical of their folkloric past.

Follow the path towards Molino Manzanares, cross the river and take the right path to the edge of the river Canyoles. The 6 km to Moixent run between oleanders, poplars, pines, sarsaparilla and mint. The path climbs a ramp after fording the river (passes over asphalted area). You leave the local road 1 km from Moixent, entering through Arrabal street and Mayor street. 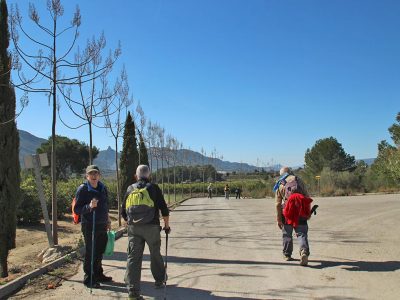 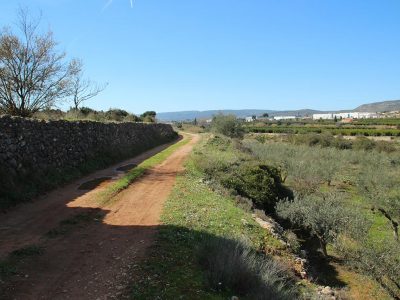 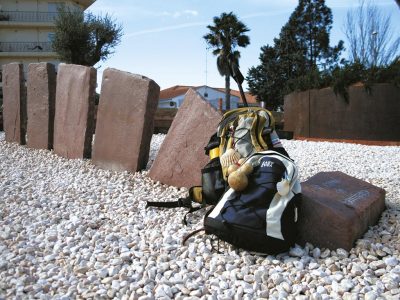 The route is marked with scallop ceramics. Moixent is located at the foot of the Serra Grossa, in the valley of the Canyoles river, which is a means of communication between the plateau and the Valencian coastline. It has always been a stop for stagecoaches and walkers.

The church, dedicated to St. Peter the Apostle, dates back to the 19th century, in the Italian Neo-Gothic style, on top of the original 14th century factory. On the Epistle side, there is a life-size image of Santiago.

Fray Cristóbal Moreno del Camino, an illustrious figure of the Franciscan order born in 1520, built two convents, one dedicated to St. Christopher and the other to St. Anthony; in 1587 he brought from Rome a large collection of relics of martyrs from the first years of the history of the Church, and a relic of the Lignun Crucis.

Moixent has a medieval castle and very important Iberian sites such as the Bastida de les Alcusses, where an Iberian bronze figurine known as “the warrior of Moixent” was found. 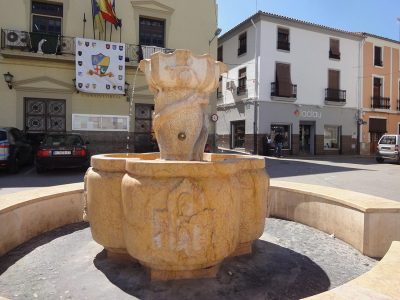 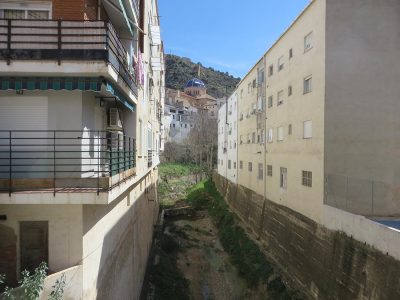 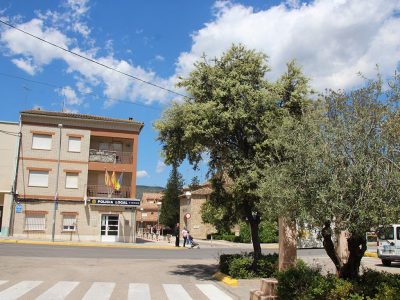