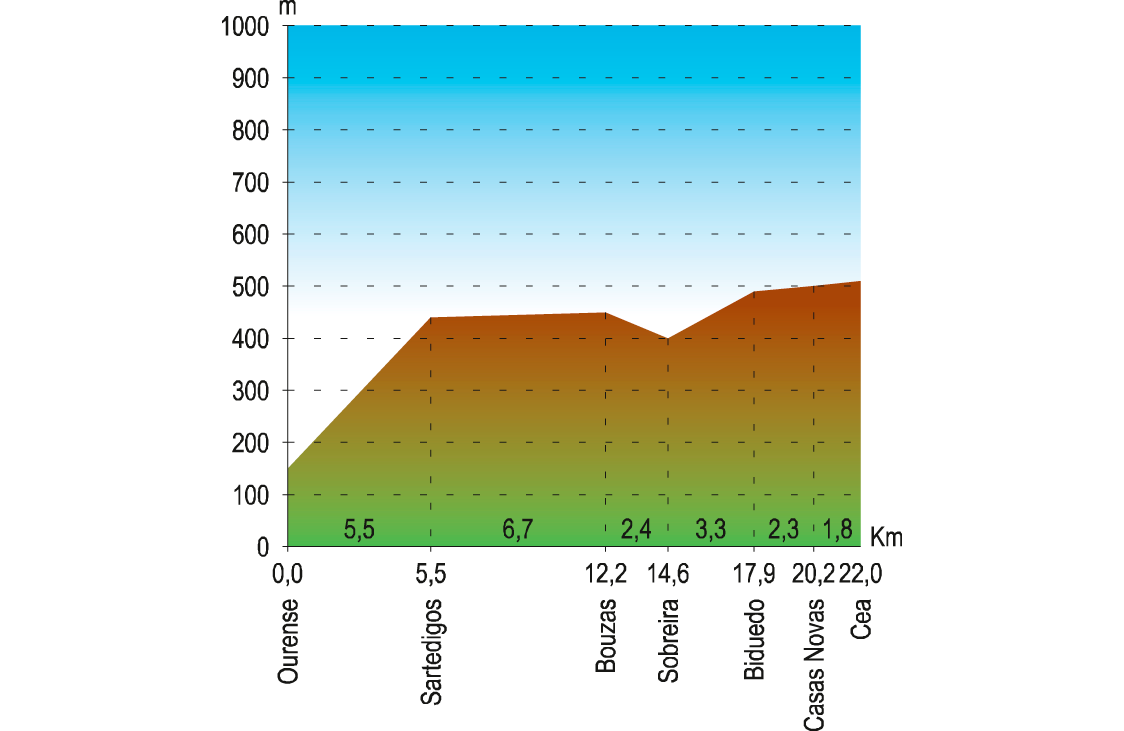 Today’s stage is relatively short, but it’s a good time to relax a bit. You leave Ourense through the Roman bridge; to the left is the hermitage of Los Remedios. When you reach the roundabout, turn right onto Santiago Avenue until you reach the petrol station, where you turn right: there are signs and a monolith by the sculptor Carballo indicating this asphalted road. It is the Camino Real de Cudeiro, which is later called Camiño de Lampaza and Camiño Real de Soutelo. After 2 kilometres, cross the N-525 and go up to Cudeiro, which has a fountain, church and cross with a pilgrim in the shaft. A few metres further on, follow the Camiño de Costa to the right and after about 200 metres follow the cobbled path that turns left and brings you closer to the hermitage of San Marcos de Costa. Further on there is a washing place and fountain: it will be good to take water because the path keeps going up.

Among oaks you reach the Mina de Chain, where there is a fountain of Mergullo, or what is the same, a fountain that emerges from the earth. After about 50 metres there is a fork, continue to the right along the white earth road and at the next crossroads, ahead. On the left, and on a hill, you can see the Convent of the Clarisas Reparadoras. There is another detour that leads to Gustey, which has a 12th-century Romanesque church dedicated to Santiago: the road goes straight on. You pass by a farm whose smell is quite annoying and makes the step unconsciously accelerate. You leave on an asphalted road that takes you to Sartedigos. There are approximately 6 kilometers to this point. Cross a local road and go to the left about 100 meters, to cross it again at the height of a sign that puts Fonte do Santo.

The road runs parallel to the road for the moment. Turn left and, after a small climb between chalets, you will see some large granite rocks “Outeiros de Forca”: the path leaves them on the right. You end up on another asphalted road and turn right again. Cross another small road marked Concello de Coles between chalets of the Urbanization A Carballa. Then, on the right, towards the main road. Going along the hard shoulder for about 50 metres you will arrive at

Parish of Villamarín, which has bars, laundry and beautiful houses. Pilgrims used to avoid coming here because of the abusive slams that they used to charge and divert to Ponte Mandrás.
You continue between chalets and cross the road again: you are coming to Bouzas, which has some installations typical of the Galician fairs, for the shelter of fairground people and clients, who are disappearing.

From here, making a zig-zag, follow the path to the right, then to the left and again to the right, go down until you cross the road that leads to Sobreira, later you pass through the beautiful and historic Ponte Sobreira, a single pointed arch bridge, with many marks of stonemason. It probably dates back to the 13th or 14th centuries, as can be deduced from the inscription on its reconstruction in the 18th century. It is on the Barbantiño river; the landscape is surrounded by “bimbias” (wicker) that accompany you during many stages.

After a short descent, you reach Faramontaos, which was Oseira’s Priory and had a Hostelry. After 16 kilometres you reach A Armida, follow the almost blinded path and, after 350 metres, Viduedo, which has a fountain, a washing place, a pazo and Peto de Ánimas embedded in the façade of a house.

The bars and shops are on the N-525 and, after walking along it for about 50 metres, you turn right and enter a path full of oak trees. After 18.8 kilometres along paths and corredoiras, you will arrive at Casas Novas. From here to Cea the road is almost all dirt and shaded. Just 2 kilometers separate us from this end of stage with the best bread in the area. Everywhere “Pan de Cea” is announced. 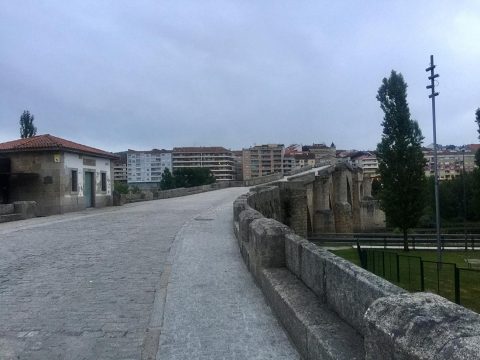 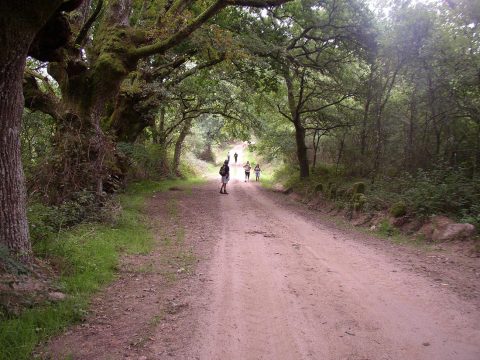 Cea is full of old bread ovens, and it’s a good idea to visit one of them. There is also a monument to the baker, located at the exit of the road. In the square you can see the Clock Tower and, throughout the town, the traditional houses forming an ethnographic group. The Sanctuary of Nuestra Señora de la Saleta is in the northern part of the city, where the road does not pass.

The history of Cea is linked, from the 12th century until the Disentailment, to the Monastery of Oseira. The Romanesque church of San Facundo is still preserved near Cea. 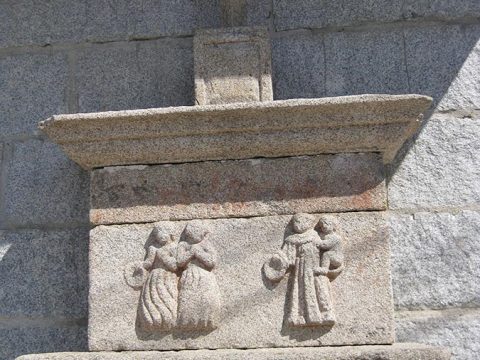 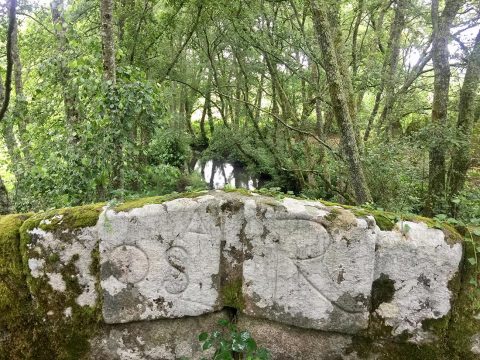 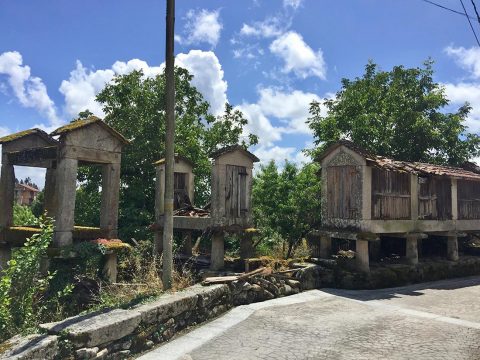 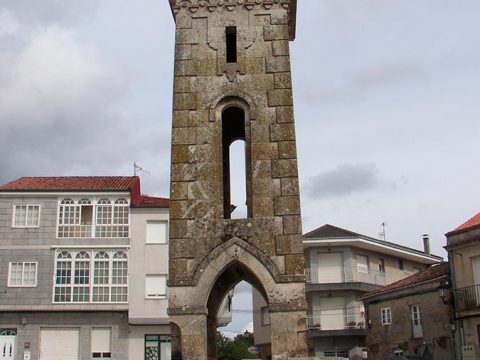