Valencia is the third most important city in our country. If you’re on your way or you’re starting out here, come with time to enjoy the city full of history, bustling and quiet, luminous and cheerful; Let yourself be carried away by the old quarter and visit its medieval palaces, its noble houses, its churches with Romanesque and Gothic traces elevated above the previous mosques, its Arab walls… Enter the Cathedral and come and see the Holy Grail, that Chalice through which so many knights threw themselves into unsuspected adventures, and in the penumbra of the Chapterhouse where it is located, it rests a little; then look at that alabaster Santiago, not very big, which to the right of the urn and to your left seems to stand guard.

If you want to see the city as a whole, climb the Miguelete tower and you will have it at your feet: now you can get an idea of what this city looks like. If you want to dream, go for a walk in its gardens or contemplate the Mediterranean Sea, that sea so many times painted by Sorolla and so many times named by Blasco Ibáñez (valencian writer). Valencia is well worth your time.

It is important to know that the route within the city of Valencia is marked with brass tiles “with scallops”, embedded in the sidewalks.

Taking as a starting point at the door of the Apostles of the Cathedral, Gothic from the 14th century, with pilgrim Santiago about to start the walk with us, the pilgrim enters the street El Micalet to the Plaza de la Reina, which crosses along its length to seek the exit from the city following the street San Vicente Mártir. Before leaving the square, on the right you can see the church of Santa Catalina (13th century), with its baroque hexagonal tower. At the beginning of San Vicente Mártir St. and on the left, a Jacobean symbol on the tympanum of the door of the church of San Martín: San Martín on horseback sharing his cape with a pilgrim, a sculptural group dating from the fifteenth century that was paid for by the knight of the Order of Santiago Vicente Peñarroja.

Leaving behind the crossroads with the Town Hall square and without leaving San Vicente Mártir St. one reaches and crosses the Plaza de San Agustín, in whose church the Virgen de Gracia is venerated: the legend says that it was carved by a pilgrim. After crossing the Plaza de España where the statue of El Cid is located, on our right appears the monastery-hospital of San Vicente Mártir, martyred by Daciano in the fourth century and of great renown throughout the Christian world at the time. The street of San Vicente Mártir crosses the Giorgeta Avenue and continues to the district of San Marcelino, beyond the city limits.

Approximately two kms away, a 15th-century cruise ship called Cruz Cubierta (Covered Cross) marks this limit. Ausias March Avenue is crossed further on, which will be bordered on the left to continue along José Soto Micó Street, the new Turia riverbed is crossed by a bridge and you enter the neighborhood La Torre, where the signposting ends with the tiles embedded in the sidewalks (from here the itinerary to follow is marked with ceramics with scallops on the walls, with yellow arrows and white and red stripes of GR path (long distance)). The path turns left onto Concepción Arenal St., Jiménez y Costa St., and Hellín St., continuing along a path parallel to the railway track on our left; cross the post level crossing and you get into Alfafar village through Blasco Ibáñez St. (old Vía Augusta), San Sebastián St. and Plaça País Valencià. 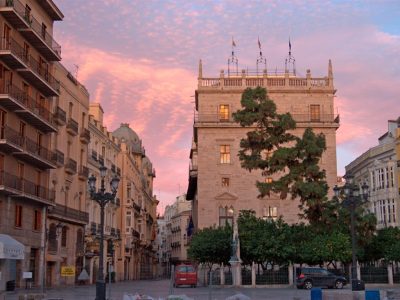 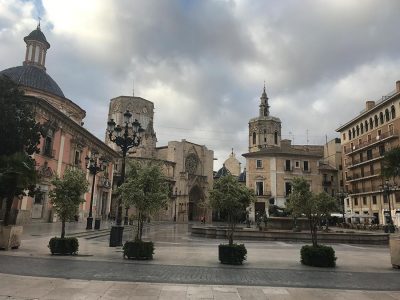 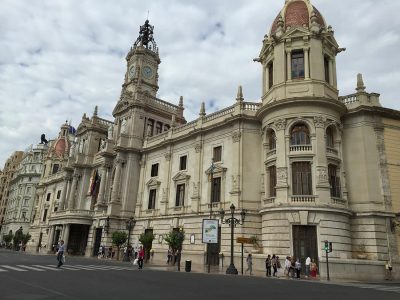 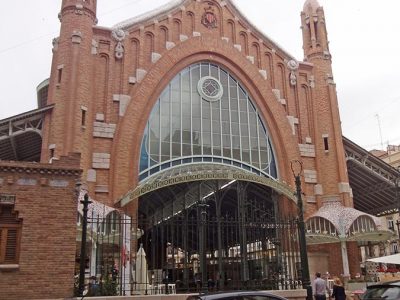 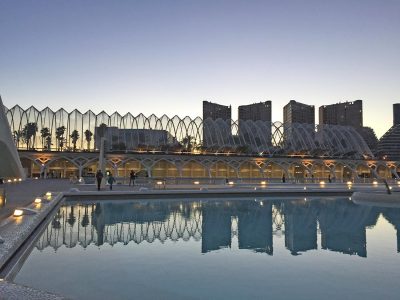 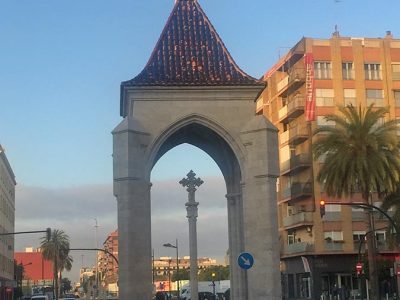 Its name comes from the Arabic voice Al Hofra, which means deep place of holes or moats. It seems that in the primitive population nucleus underground galleries were discovered. The church dates from the 14th century and has a Gothic carving of the Virgin of the Don, a seated virgin with the Child in her arms holding a little bird in her hand. Tradition tells us that this Virgin was discovered in the place where soldiers accompanying King James I observed seven shining stars coming down from the sky. Alfafar had a hospital for the poor and passers-by and Dr. J.M. Julián Street was once Dels Pel-legrins Street.

The parish has a special stamp to stamp the pilgrim’s credential. At the tobacconist C/ Cánovas del Castillo, 11, they also stamp (during business hours).

Leave Alfafar by the street del Sol, passing by the Cultural Circle and cross the Avenida Reyes Católicos; when you reach the Polideportivo, turn left to look for the path to the Cemetery. Continue straight on, pay attention here, cross a road with traffic that goes to the Massanassa sports centre, turn right and you will reach the Camí Fus underground pass with a pedestrian pavement, which takes you to the Massanassa village. 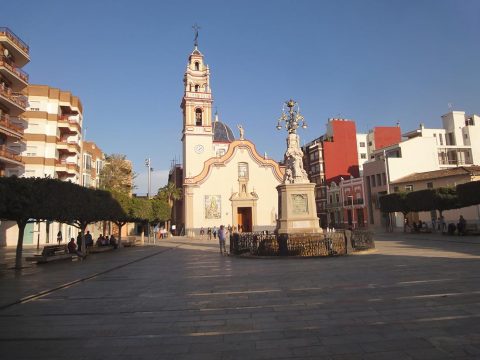 The route within Massanassa is marked with scallop ceramics.

Continue to the Plaza de la Constitución, calle Els Furs, calle Major, calle de la Creu, calle del Doctor Joan Pesset and along the path parallel to the railway up to the Barranco de Xiva, which is crossed by a footbridge to get Catarroja. 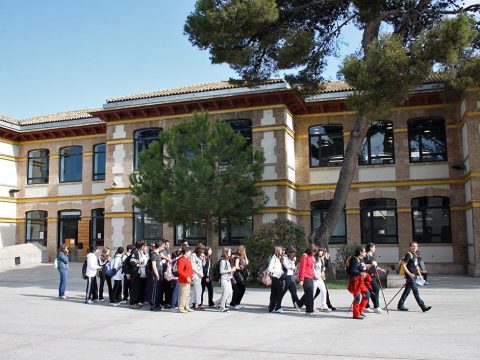 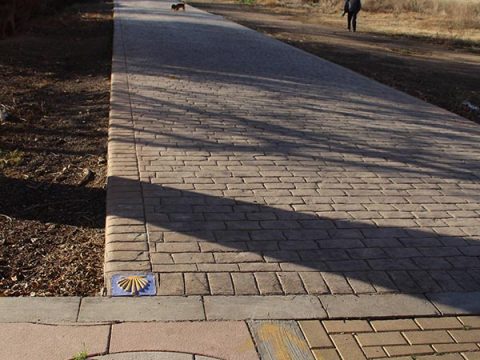 In Catarroja the route is marked with metallic scallops on the ground.

Catarroja is an unavoidable reference point in the itinerary of poverty and pilgrimage, as we have verified in the Municipal Archive: they were given “llits als pelegrins per una nit”.

You enter through the Ronda de l’Est, parallel to the railway, until Calvari street. Turn right to Salvador Pechuán, then left to pass through the Municipal Market.

After a visit to the church of San Miguel, we go back to the Plaza del Port. Take Reina Street to the underground passageway on the other side of the railway line. Turn right and follow the Camí Vell de Russafa, crossing the industrial area in Albal. A new road forces us to make a small detour to enter the industrial area of Beniparrell, the dual carriageway is crossed by an underpass and we continue to Silla, previously passing through its industrial area. 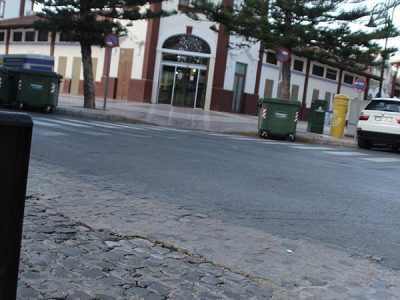 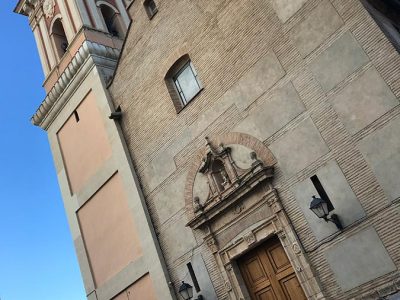 Here, the route is marked with scallop ceramics. You enter Silla through Valencia street. Silla had pilgrims’ hospital of the Order of St. John of Jerusalem. You can visit the church of Our Lady of the Angels and the Town Hall with its Arabic tower.

The popular festivals are dedicated to the Santo Cristo, with very spectacular acts such as the “carxofa” and the “danza dels parrots”.

Take San Roc Street, turn left into Port Street, go straight on past Pension Puerto, cross the CV 4008 and follow it for about 400 metres. At the height of the El Salvador engine, turn right. This path called Camí Vell de Silla will take you to Almussafes, with the Albufera and the rice fields on the left: some herons will take flight when they hear our footsteps. It passes in front of another engine, the one of San Francisco. The path makes small detours crossing fields or irrigation ditches and leads us to walk parallel to the railway track.

After 7 kilometres, turn right to cross the track by overpass, arriving at the small town of El Romaní, dependent on the municipality of Sollana. There is a Bar.

Cross the road, follow the street El Molí, pass the dual carriageway by overpass and you can already see the town of Almussafes. 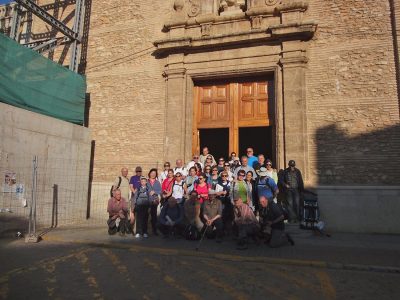 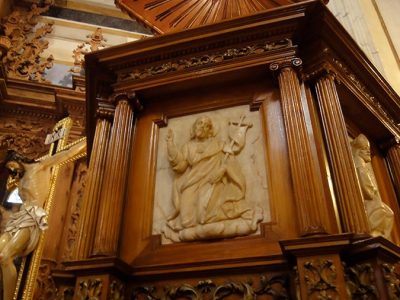 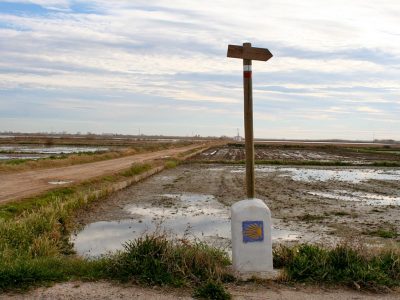 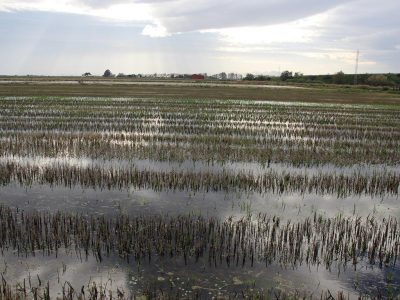 The route is marked with scallop ceramics. The name Almussafes derives from the Arabic word ‘ mazaf’ which means customs, since certainly the merchants would pay for it if they passed through the tower of Racef. Enter the Ronda del Sindic Antonio Albuixec and at the roundabout turn left onto Valencia Street. At the level of the Local Police, turn right onto Calle San Miguel and, at the level of Ausias March, turn left, passing in front of the Casa de Cultura and continuing to the Central Park, where the Town Hall is.

Continue along Santa Ana street until you reach Castell street: on the left is the Church of San Bartolomé from the end of the 13th century and the Arab tower of Racef. This town has experienced a great development in recent years with the presence of the factory Ford-España. You leave Almussafes by the street of the Castle and Salvador Botella that leaves us in the neighboring population. 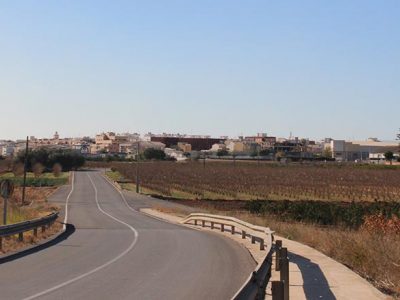 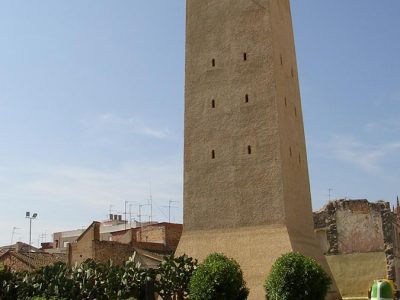 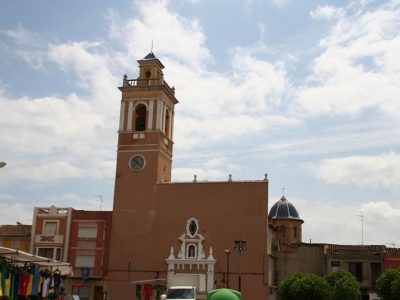 The route is marked with scallop ceramics. This town has Roman and medieval ruins. It has two Arab towers: 0ne in the main square (similar to the one in Almussafes), which is next to the Town Hall, and the other one in Muza, at the entrance of the village about 100 m from the way.

Leaving the church of San Pedro and the Town Hall behind us, we continue straight on, we pass the Market in Santa Bárbara Street, we arrive at Germaníes Avenue, we turn right until Plaça de Blasco Ibañez. At this point surround a fountain and follow the street Pintor Segrelles or Camí Mocarra and then the path of l’Hort de l’Alemà, passing through l’Hort de les Monges, the Casona del Chocolatero and, once you reach the crossing of Barranquet, continue straight ahead this old road of Benifaió. 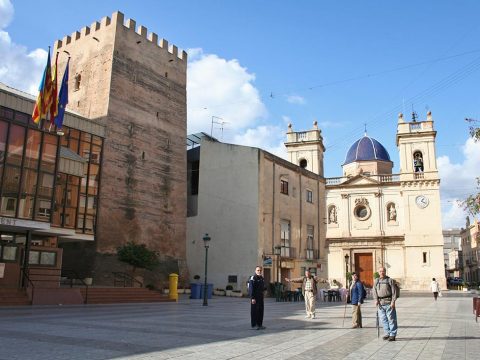 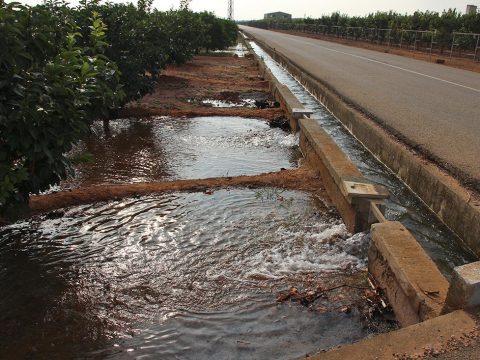 The route is marked with scallop ceramics. You enter Algemesí via Crist de l’Agonía, ronda del Calvari, dels Arbres street, Mossen Blanch street, Valencia street and Abadía street, where the Hospital of Santiago was located and which today corresponds to the Communion chapel. The archpriestly church is dedicated to Saint James the Apostle and has an altarpiece with paintings by Ribalta. Algemesí must be visited without hurry: its streets and monuments may surprise us pleasantly.

The Museu de la Festa, in Nou del Convent street, is well worth a visit. 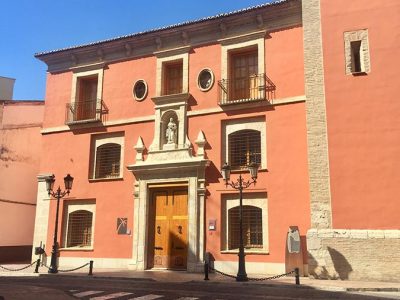 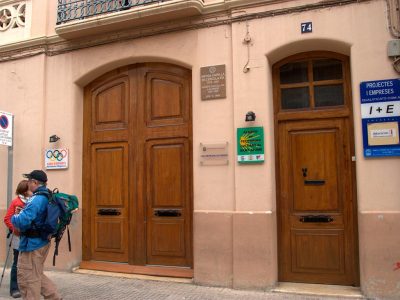 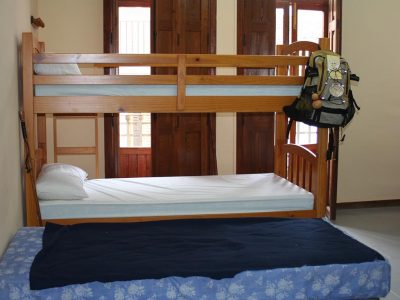 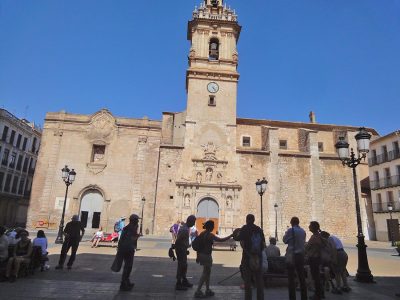 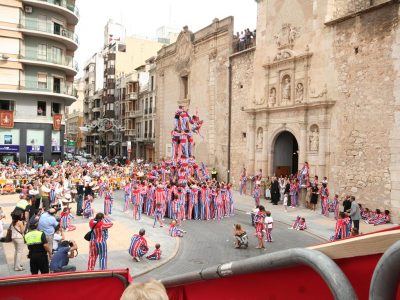 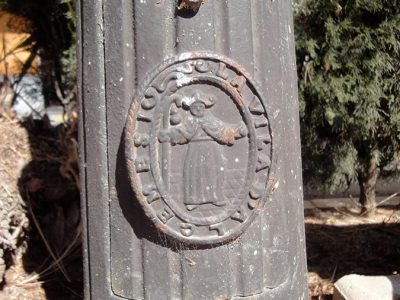